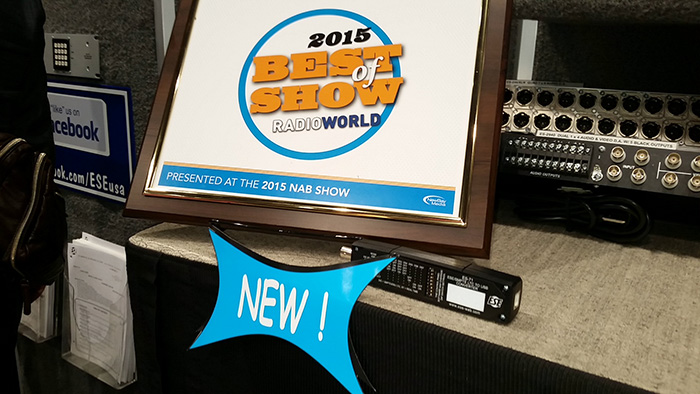 April 22, 2015El Segundo, CA —The ES-71: SMPTE-LTC Time Code to USB Converter, manufactured by ESE, is the recipient of one of the industry's most prestigious technology honors, NewBay Media's Best of Show Award, presented at the 2015 NAB Show in Las Vegas by Radio World.

NewBay Media's Best of Show Awards are evaluated by a panel of engineers and industry experts, and are selected based on innovation, feature set, cost efficiency and performance in serving the industry.

Winners receive an award for display and will be featured in Radio World, the news source for radio owners, managers and engineers. All nominated products also are featured in the special Best of Show Awards Program Guide, to be distributed in digital edition form to more than 100,000 readers of Radio World, TV Technology, Digital Video, Video Edge, Radio magazine, Pro Sound News and Sound & Video Contractor after the convention.

The ES-71 is one of three Time Code to USB Converters or "TCUSB" by ESE that offer a simple and quick solution for synchronizing a computer to existing time code equipment. When a Serial port or a PCI slot for a Time Code Card is not available or these solutions are undesirable, an ESE "TCUSB" is the ideal alternative.

For additional information please contact ESE or Monica Trotter / Marketing @ 310-322-2136 or see us on the web at www.ese-web.com